Stand in the shadow of the mighty Mother's Necklace. Rub shoulders with the elite mountaineers attempting to stand on the mother's shoulders.

Ama Dablam, from whichever angle you look at her from, has a face you'll never forget!

One of the most impressive and instantly recognisable mountains in the world, Ama Dablam is a favourite for mountaineers and photographers alike. Currently the third most popular peak for Hiamalayan climbers, base camp hums with activity in peak season and the trek there takes in hundreds of wonderful vistas of this majestic mountain.

Ama Dablam means "Mother and her necklace"; the long ridges on each side said to be like the arms of a mother (ama) protecting her child, and the hanging glacier, which is thought of as the dablam, the traditional double-pendant containing pictures of the gods, worn by local Sherpa women.

Our local staff are paid a decent living wage, get provided with all the right gear and are always well looked after. We pride ourselves on this.

On arrival in Kathmandu you'll meet your team at the hotel, enjoy a traditional feast before taking a jaw dropping mountain flight to Lukla airstrip early the next morning. From here you follow the beautiful trail towards Mount Everest, via the Sherpa capital of Namche Bazaar and the inspiring Buddhist monastery at Tengboche. Views of Everest and Ama Dablam grow increasingly impressive until the village of Pangboche where you push uphill to the base camp below Ama Dablam. From here there are spectacular views across the valley. After lunch at Ama Dablam Base Camp and another night at Pangboche you re-trace your steps down the Khumbu Valley, before flying back from Lukla to Kathmandu.

Trekking to Ama Dablam Base Camp doesn't take as long as most of the other high treks in the Everest Region so is ideal for those with tighter time limits.

Short but oh so sweet adventure in the Khumbu Valley

The mother and her necklace. At least, that's what it officially translates as. Many of the locals prefer to think of it as the mother and her daughter. Cradling her offspring and keeping her safe. As foreboding and dangerous as these mountains can be for those trying for the summit - the rest of us can't help but see the gentle beauty. 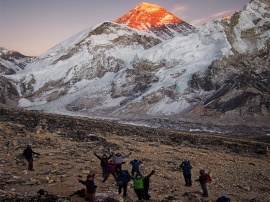 High altitude trekking is a challenging experience and the people you're with start to feel like family. An adventure like this can form lifetime frendships. 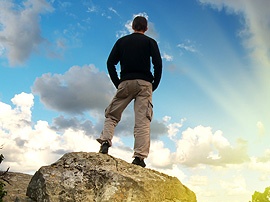 5000m (16400 ft) is high enough to sky-dive. Oxygen and atmospheric pressure are lower, thinking and moving are both more challenging. How will you go?

All our Ama Dablam Base Camp Treks are fully booked, but we can add more. If you're keen to hit this trail, please let us know.


Do you have 4 or more people wishing to trek? If so, then you can build your own custom trek and get it perfect for your group!