The Story of Elite Trekkers 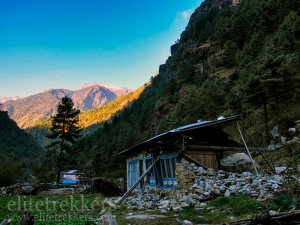 It's late 2015, the damage from the earthquake that hit Kathmandu in April of that year is still visible all over the country. Perhaps more damaging than the structural consequences of the earthquake however, are the economic ones. As a whole country struggles to find funds to piece incredibly important sites of historical significance back together, another, big portion of the country reels from the enormous downturn in tourism that followed in the wake of the quake.

The once teeming streets of Thamel in Kathmandu, the lakeside haunts of Pokhara and the cloud touching trails of the Himalayas are comparative ghost towns compared to 12 months earlier. Of course, this can be nice when you're on the trail (and certainly the last few trips into the Khumbu and Annapurna were great for photography, with so few people around), but for the teams of guides, porters and other Sherpa peoples that depend on this tourism for their livelihood, this is a disaster.

Speaking to our friends around Nepal - all incredibly experienced, friendly and skilled guides - painted a dark picture of life for them. Where once they had prospered in the joy of booming tourism, now they had to fiercely compete against each other for the minimal amount of tourist trade coming through their glorious country. We heard tales of unscrupulous agencies all over town slashing wages by more than half and imposing ever tougher working conditions on ever more desperate people.

The final straw came as we sat with one of our guide friends for breakfast and he explained to us that it was no longer sustainable. He had tried and tried to make things work but times had proven too tough and the only option he had left available to him was to leave Nepal and his beloved Himalayas behind and travel away to Korea, on a 5 year contract in a dark factory. This was the only way he could see himself being able to support his wife and his young son - the family he'd only be able to see for two weeks every 2 years under this new contract. He and his family were devastated at this prospect, though he said many more of his friends and family were facing similar prospects.

See how Elite Trekkers are making a difference 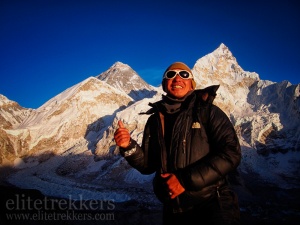 We couldn't bear to see this happen to such wonderful people, such skilled and experienced mountain men and women with so much love for their country and family. We set about trying to make a difference to their lives.

First we were going to do some promotion, a few Facebook posts here and there and a bit of advertising for them. We realised we could do better than that though, so we thought about setting up a small website where customers could make enquiries. Still though, we knew this wouldn't be enough. After a lot of thought and a good look at what we were doing with our lives, we sat down and put a proposal to our Nepali friends. Coming from UK, Australia and Nepal, as a team we had all the experience we needed - not just in the mountains but in business, customer service and management. We agreed straight up that all profits from the company would be designated for the local people and this is where we really make a difference, because this has provided a life for people that were on the verge of losing everything, and created opportunities that couldn't have been dreamed of before.

We also decided that everyone we work with should benefit also and we made it our mission that all of our staff get paid a proper living wage, that no one is taken advantage of and most importantly, that everyone enjoy well equipped, safe working conditions at all times. So that's what we're doing now - we're providing you with the best guides and porters we can find (and we're always looking) while ensuring we improve the quality of life for as many people as we can in the process.

We helped Mahendra and his team get the company registered and open for business in Nepal and have continued to offer a constant supply of voluntary advice and support for them ever since.